A year...Whiz and gone by just like. HOWEVER, it was a wonderful and joyous year to me. I learnt(and forget) a lot of things, cycle, eat, sleep, and burnt a lot of midnight oil(padan muka). And laugh a lot. Did a lot of nothing also.

Last night was....Great! Very tiring, very frustrating that I couldn't think of any songs and got splashed. My legs felt like lead from standing for too long, and my hair smelt like flour. And thanks for the cute egg, you guys!(Who drew the cat anyway?Damn, its too nice to eat!) 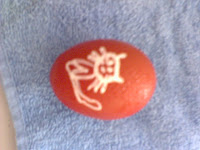 It was definitely one of those times I would say "Its not what we do , the occasion is what's important". It signifies a transition period, a mark. Like the white pebbles left behind by Hansel in the fable 'Hansel and Gretel'. It was fun, and it meant a tremendous lot in every way possible.

Not just the regular fun though, I went home with mixed feelings in my stale brainjuice and a tugging war in the four-chamber organ: I sure felt glad that we complete the year(about to), the downside is,we won't see each other that often, won't attend classes together except some, won't embrace 2010 together like we did 2009, won't be messing around with each other as much and etc.

At least all of us would still be in Kampar in the few years to come. At least we're not like the others from Art stream, who would mostly be separated to different campuses. I couldn't imagine having to start all over again. Being in a new place, new class with new people all over again.

I'm not very good at expressing myself verbally. And with my 'occasional' mood swings, it often gives people the wrong impression. So...If I had ever did you guys wrong, please forgive me('It's too late to 'pologize, it's too la-aaaate....').

We all came from different places, and will be heading different directions in the future. Perhaps everyone has gone through some rough patches, ups and downs throughout the year(C'est la vie!). But whatever it is, I'm glad that we met each other. From my part, there's just so much to say, trying to sum up all the experiences in an entire year.

If speech fail me, words will not. If words do fail me,hopefully this song can convey what my heart wants to say.

Posted by Vagrantdarter at Wednesday, April 15, 2009